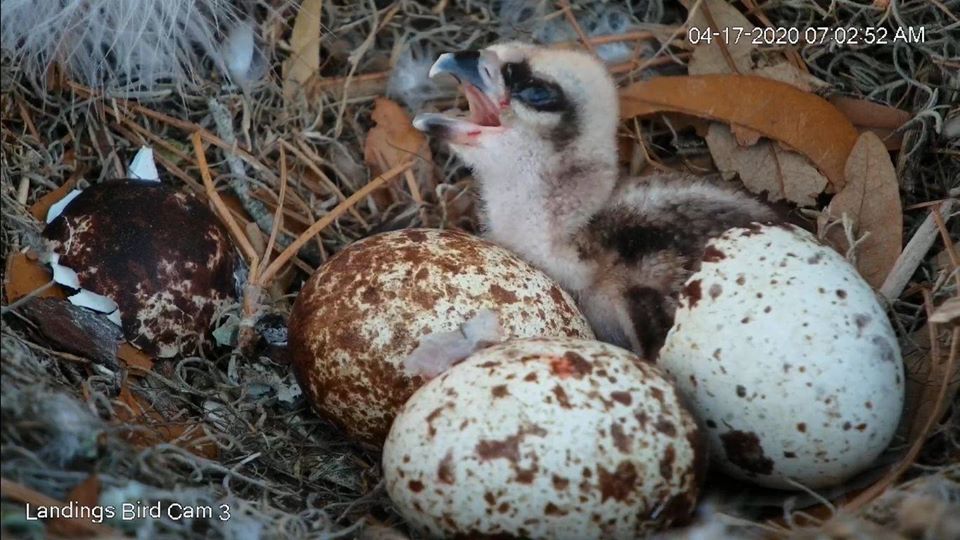 The first of three osprey eggs in the Skidaway Audubon Landings Bird Cam nest site hatched in the early evening of April 16. The new arrival had to break free from the egg that it's been growing inside of for the last 36 days. The first "pip" of the young bird cracking through the shell was seen on camera at 4:48 pm. To see all the action, go to the website landingsbirdcam.com where you can see all three cameras live. Scroll down below the live cameras to see the twin twitter feeds that have photos and videos of the most exciting moments of the 2020 season.

Since 2014, Skidaway Audubon has been streaming live video 24/7 from an Eagle’s nest 80 feet up in a pine tree close to the eastern marsh. During that time, the nest has been visited by dozens of species from bald eagles to wood storks to red-tailed hawks to pileated woodpeckers, and has been occupied by great horned owls and ospreys. Each season, at least two owls or ospreys have fledged from the nest.

This last October, the cameras had to be moved due to the death of the nest tree. A large group of volunteers helped to move the cameras to an adjacent tree. They then built a large platform and used hundreds of sticks, some pine straw, and spanish moss to form a rudimentary nest. The nest was visited by great horned owls and a number of other birds, but has now been occupied by a pair of Ospreys. The Ospreys are prolific nest builders and have added what’s estimated to be more than a hundred pounds of additional sticks and other nest material, making it a true nest built by birds. In addition to building up the nest, they’ve had to defend it against other birds that think it looks like a nice location. Some of those 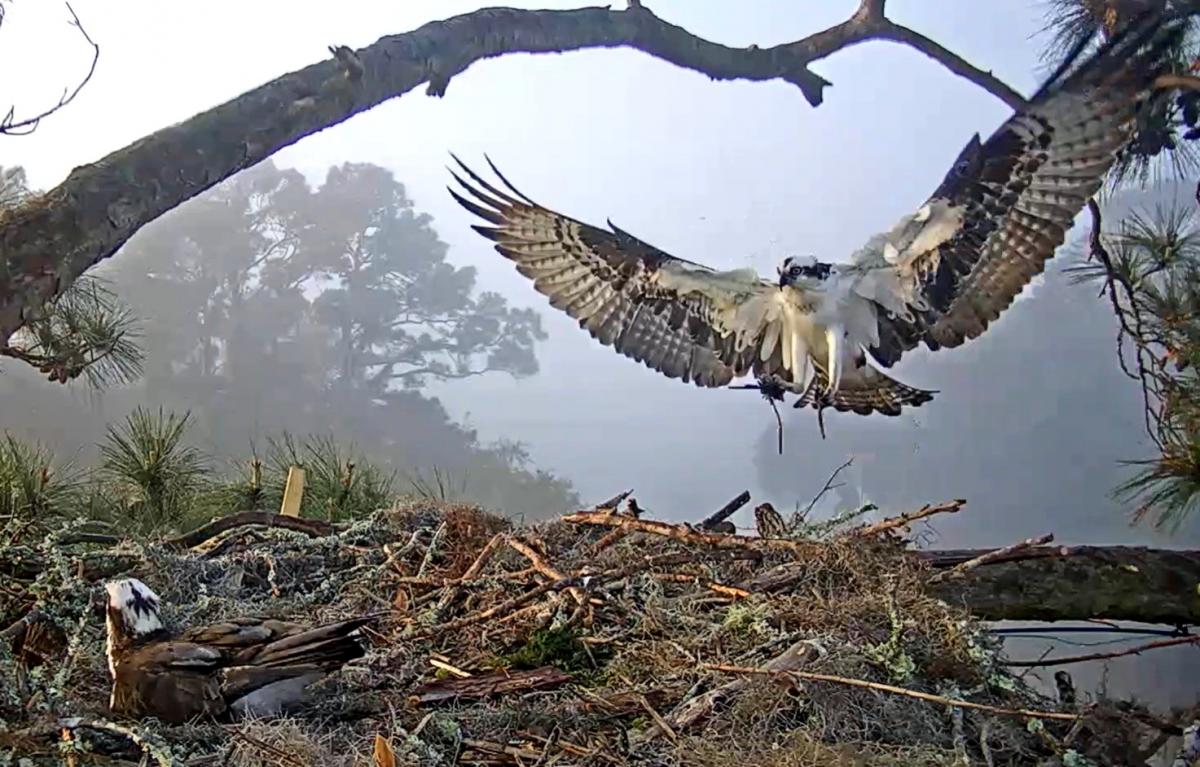 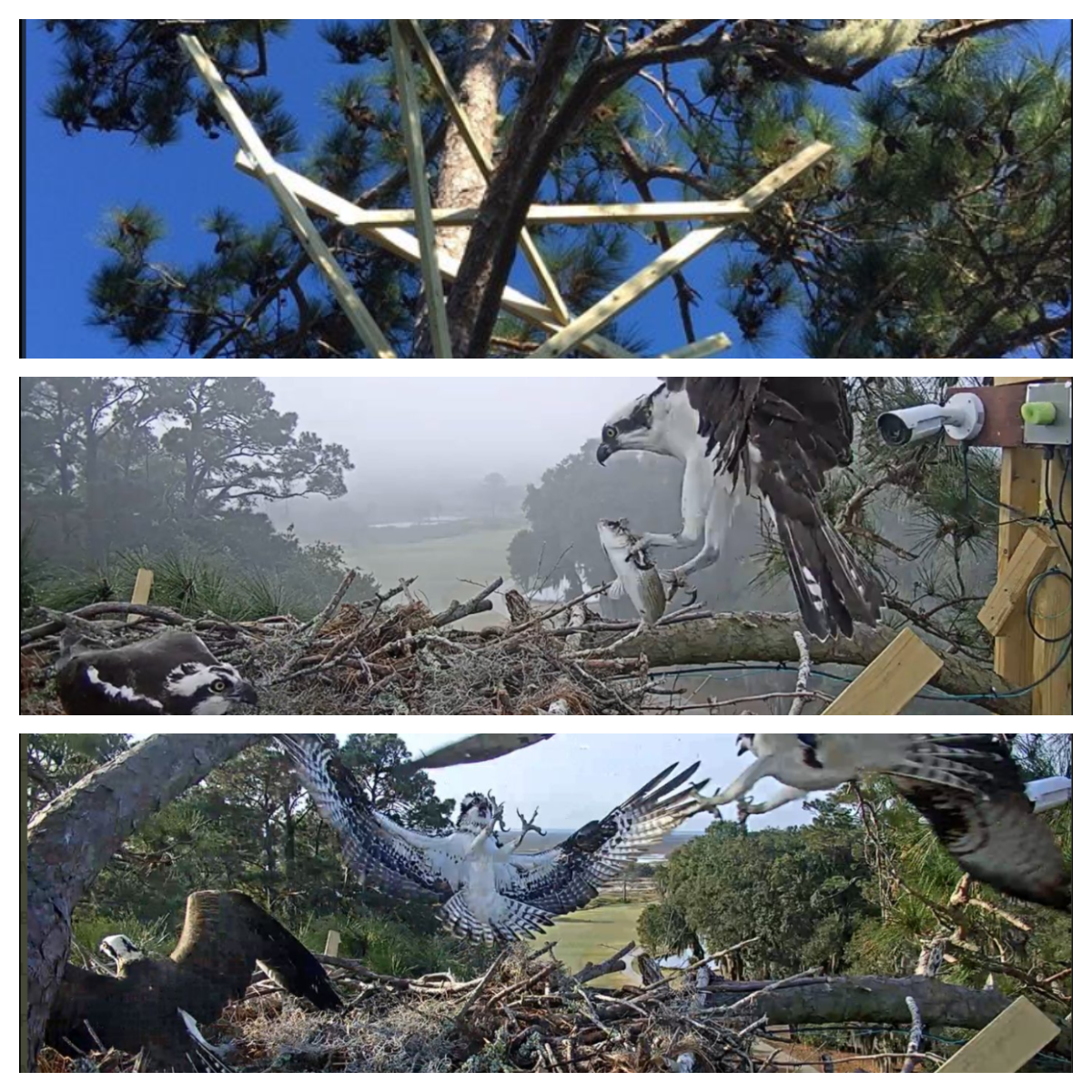 And now the female has produced four eggs. The first was lost early on, and there are now three eggs being incubated. The male and the female share brood duty, but the male does all the fishing to provide food for both the pair. He’s a great provider and it’s fascinating to see him arrive with some really big fish to feed himself and his mate.

The cameras can be seen at the bird cam website (http://landingsbirdcam.com/) where all three cams are visible. There's also two Twitter streams there, to provide the highlights reel. You also can watch on the website of our partner, The Cornell Lab of Ornithology.

If you want to see the cameras on your large screen Smart TV, you can see them live on YouTube. Just search for our partner, the Cornell Lab of Ornithology – use the search words “Cornell Savannah Osprey”, and you will see three streams that are labeled “Live” – click any one of those to see the cameras in real time.

This article was originally published by The Landings Association on their website. Visit landings.org to read the original article. https://landings.org/news/2020/04/17/new-arrival-landings-bird-cam-nest