One of the many selling points of The Landings is its natural habitat and timeless beauty. The many towering Live Oaks, Red Oaks, Magnolias, and stately pines that grace the island help to make up some of this beauty. But did you know there are some hidden gems within The Landings that help to add to the southern charm? Over the next few months, I will be your tour guide as we explore some of these areas, many of which you may have heard of, and others that may come as news to you. If you know of an area of the community that you would like to see highlighted in this series, or would like to share photos of your favorite on-island getaway, please email me (lynnl@landings.org). 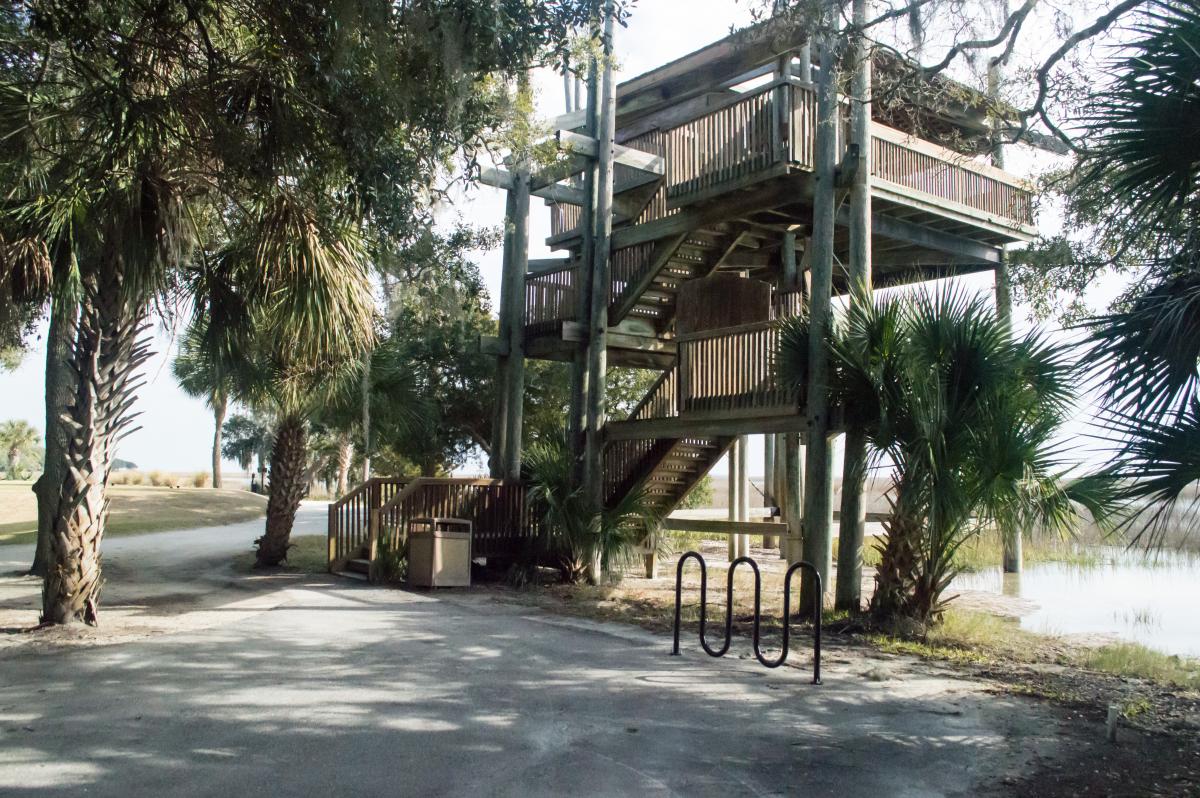 If you want to view the island from a vantage point that allows you to take in some of the beauty and serenity The Landings has to offer, then you have to visit the observation tower on Marsh Tower Lane. Known to most residents simply as Marsh Tower, this popular structure is accessible by footpath and golf cart and is open until 10 p.m. each night. 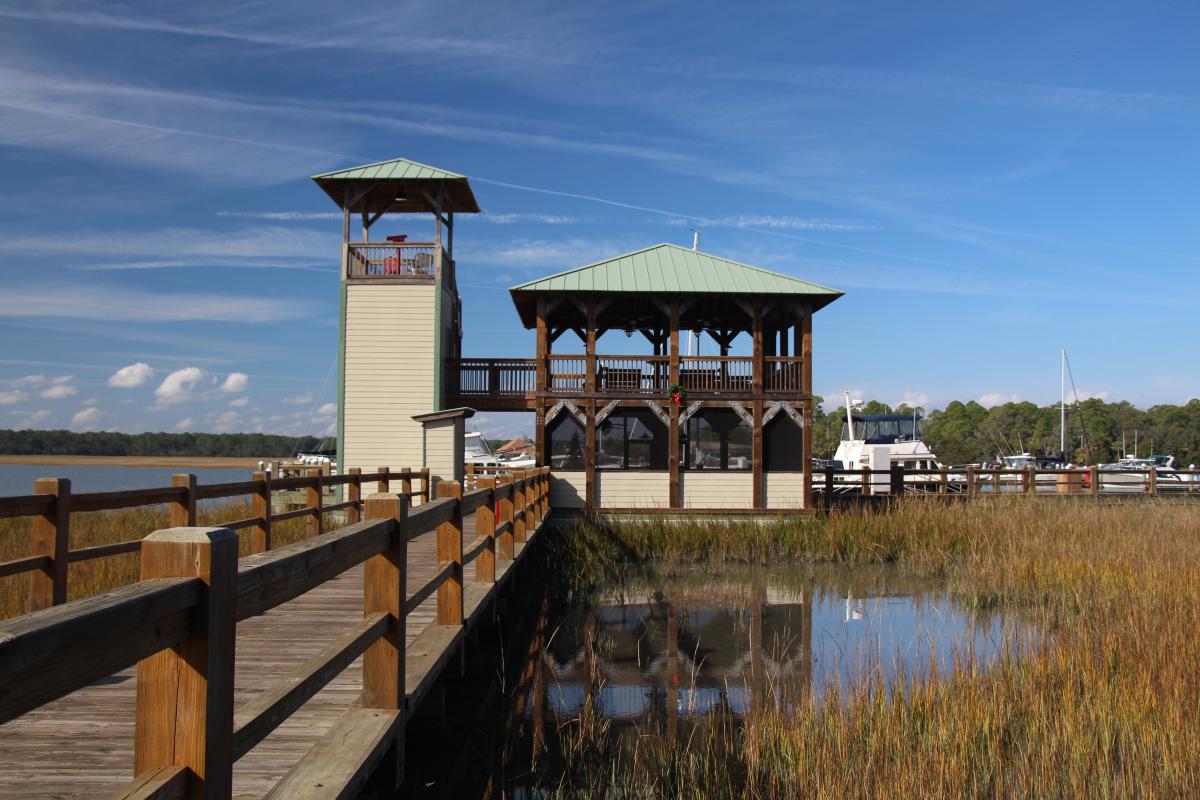 The Delegal Observation Tower also is a local hotspot. It can be found at picturesque Delegal Creek Marina, which is located at the southernmost part of Skidaway Island, adjacent to the Intracoastal Waterway and within close proximity of Ossabaw Sound.
Adding to the beauty of that marina is the Observation Tower that can be found on the top floor of the docks. The view from the Delegal Tower is breathtaking, and there is a six-foot long interpretive sign that uses text, nautical charts, and drawings to give viewers a better understanding of what they are seeing from this lookout. Developed as part of the community’s sustainability efforts, sign content was contributed by Anne Lindsay, UGA Marex; residents Allison Scott and Mal Welch; and TLA staff. Funding was provided by Skidaway Audubon.

If you are looking for a treasure a little closer to ground level, then try hiking, running, or biking the 2.33 miles of Landings Nature Trail. The Nature Trail was the brainchild of Landings Garden Club Members Linda Sue Babcock and Nancy Crawford. Their inspiration was to add indigenous, colorful, native plants to an area where residents could see what was available and how well they could be used in landscaping. Additionally, the plants also would add to the biodiversity of the island and provide food and cover for the birds.

The initial trail began with the wooded area in front of The Landings Association’s Administration Building (600 Landings Way South). However, at the same time this idea was born, the Association had assembled a pipeline through the woods behind the building to transport water from the south end of the island to the north end as part of compliance with State water restrictions concerning the Floridan Aquifer. This area became the perfect biking and walking path for a Nature Trail. In 2015, nearly one mile was added to the existing trail that connected a newly graded trail between Huntingwood Retreat and Cotesworth Place.

The Nature Trail is maintained by The Landings Association and offers a delightful trek through the woods beneath a canopy of pine trees. It is not an odd sight to see deer scamper by or hear the flutter of birds overhead as you travel along. Do be careful though, as there has been the occasional snake sighting. But then again, it is nature’s playground. 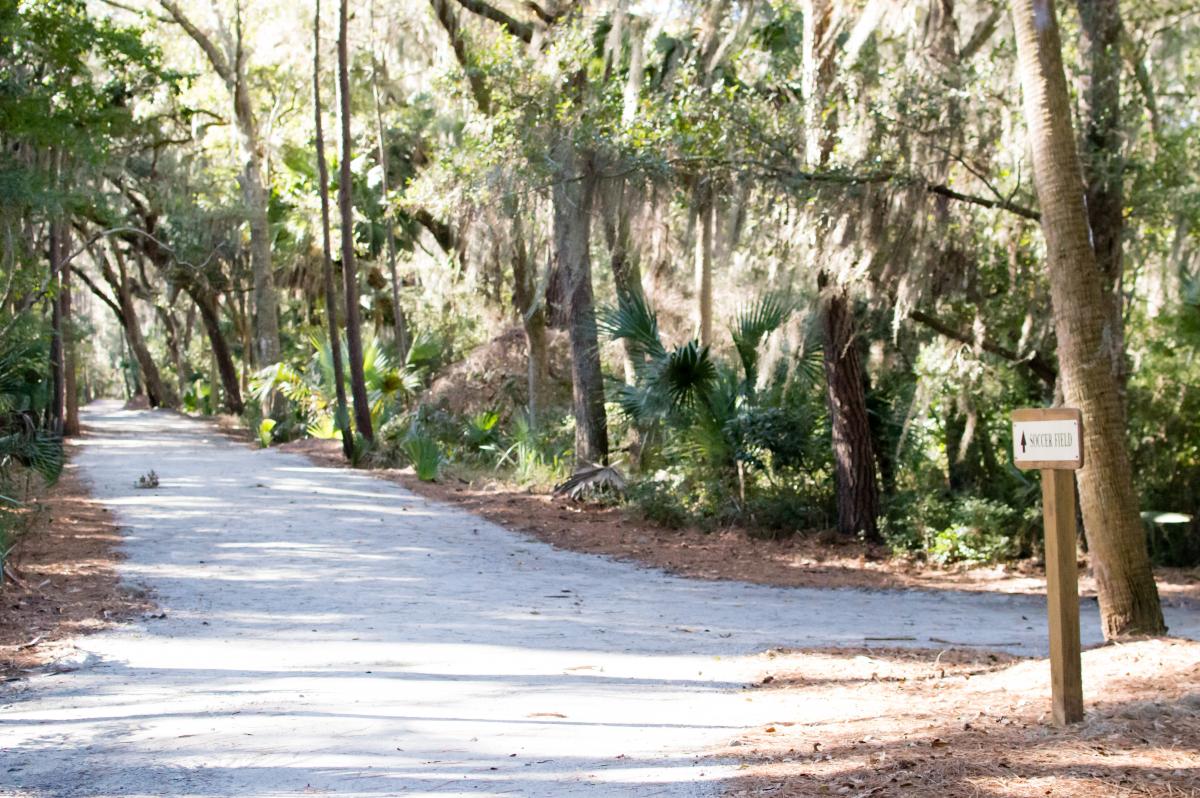 This article was originally published by The Landings Association on their website. Visit landings.org to read the original article. https://landings.org/news/2020/03/09/guide-landings%E2%80%99-treasures-towers-and-trails