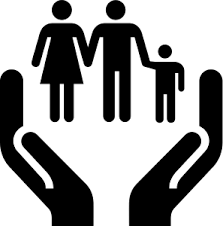 On Tuesday, vendor representatives from Landscape Structures (Playground Creations) presented four playground designs to the Athletic Field Complex Committee.  Landscape Structures also brought virtual reality goggles which were a huge hit among the committee!  The goggles allowed them to actively witness children interact and play on the variations of equipment.  The committee intends to meet again next week to work on narrowing down the design elements. 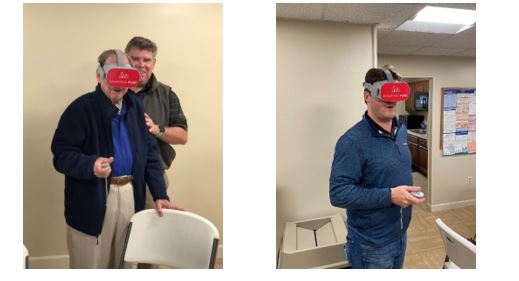 In-house staff replaced a damaged storm water drainpipe that runs along the roadway from the Club Marshwood Maintenance Facility to the Utilities, Inc. Water Tower this week.  The damaged pipe resulted in an excess amount of water in the drainage ditches along the Dog Park which caused some flooding in the parking lot. 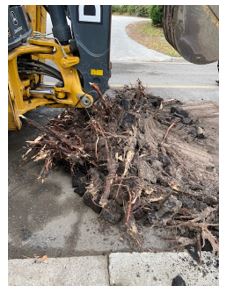 Luckily, no furry friends were adversely affected by the flooding!

This week, in-house crews completed repairs to the lagoon banks of Lagoon 36 and Lagoon 85.  Both lagoon banks were beginning to erode and required stabilization in the form of riprap, sand and erosion matting. 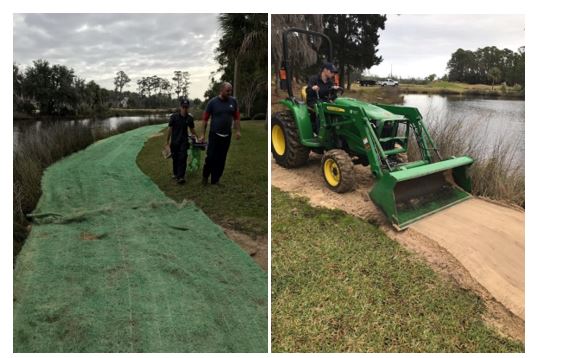 As reported last week, the basement in the Delegal Marina Sunset Pavilion received a couple of inches of standing water throughout the facility after a series of heavy rainfall events. Historically, the basement has had issues with water ponding, specifically during high tides and rain events – predominately due to its subsurface elevation.  The building is equipped with a sump pump to elevate the additional influx of water; however, the pump became nonfunctional during a heavy rainfall event.  In-house staff replaced the sump pump this week and cleared the storm drain that drains the water from the building into the marsh.  Additionally, in-house staff will replace the check valve on the pipe that is no longer functional.  This check valve acts as a backflow preventer to keep the saltwater from seeping into our storm drain system.

This week, in-house staff began the annual inspection, repair and replacement of community path bollards located throughout the community.  Bollards exist on community paths to prohibit vehicles from driving onto and damaging the paths.  The bollards also provide additional safety for pedestrians who walk/run/bike along the path system from adverse interactions with vehicles/trucks.

On Monday, in-house staff began the annual inspection, repair and replacement of damaged reflective signage (STOP signs, speed limit signs, yield signs, et al) throughout the community. The objective of this program is to keep all signage within the community visible at night, well-maintained and to provide uniformity.

This article was originally published by The Landings Association on their website. Visit landings.org to read the original article. https://landings.org/news/2020/01/17/public-worksworking-you