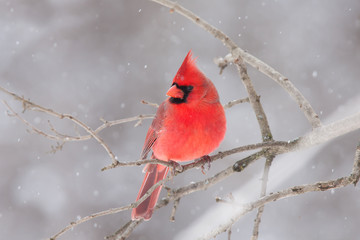 The Christmas Bird Count (CBC) began on December 25, 1900, when Frank Chapman proposed a change to the longstanding tradition of a Christmas hunting challenge.

Instead of using guns to bring back the most furs or feathers, Chapman proposed using binoculars to complete a bird census, as he knew bird populations were beginning to decline. There was some excitement for the new tradition, and 27 birders worked in 25 locations to notate all birds seen and heard that day. The tradition has continued, and this winter will mark the 120th Christmas Bird Count, one of the longest standing citizen science projects on record.

Today, the CBC spans from December 14 to January 5 in North and South America, with tens of thousands of volunteers participating. Audubon and other organizations use data collected in this census to assess the health of bird populations and to help guide future conservation action.

To maintain the integrity of the data, an area compiler will coordinate a single day for all counting to be done in that area. The best part is that you do not need to be an expert birder to participate; there are many important jobs during the CBC! Our local counts are scheduled for December 20 at Harris Neck and January 4 for the Savannah area. Those interested in participating can contact Ogeechee Audubon via this link www.ogeecheeaudubon.org/christmas-bird-count/.

This article was originally published by The Landings Association on their website. Visit landings.org to read the original article. https://landings.org/news/2019/11/18/christmas-bird-count-fun-and-informative-tradition