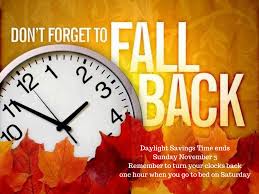 If sleeping an extra hour is what you’ve been craving, then you are in luck because Daylight Saving Time (DST) officially comes to a close for 2019 on Sunday, November 3 at 2 a.m.

Smartphones with automatic date and time settings will make the change for users; however people with clocks and watches will manually have to set their timepieces back an hour. If you want to make the most of your extra hour and skip the hassle of changing clocks on Sunday, go ahead and set your clocks back an hour Saturday night before bed.

Who can you thank for DST? According to Smithsonian Magazine, the concept was proposed in 1784 by Benjamin Franklin. The purpose of the shift is to transfer, in effect, an hour’s worth of daylight from the early morning hours of the day, and use it to push back sunset until one hour later in the day. This arrangement is claimed to cut electricity usage in the evening and help reduce accidents.

After several European countries began practicing DST during World War I, the United States formally adopted it in 1918, but it proved unpopular and was discontinued in 1919. It didn’t return on a National level until World War II and was referred to as “War Time”. As there still were no federal laws in effect, by 1966 the different DST practices throughout the country were a source of difficulty for businesses, television networks, and airlines. Congress then passed the Uniform Time Act which specified that DST begin on the last Sunday in April and end the last Sunday of October.

After the energy crisis of 1973, President Richard Nixon signed the Emergency Daylight Saving Time Conservation Act. This put the United States on DST for the 15 month period between January 1974 and April 1975. But in 1986 the federal law was amended to start DST earlier in the year. The start and end dates were again modified in 2005 when Congress passed the Energy Policy Act. Finally, in 2007, the DST start and end dates we now observe were put into place.

While much of the United States observes Daylight Saving Time, a few places such as Hawaii and most of Arizona do not. If you’d like to see a complete list of geographical locations that observe DST visit www.timeanddate.com.

This article was originally published by The Landings Association on their website. Visit landings.org to read the original article. https://landings.org/news/2019/11/01/daylight-saving-time-2019-ends-november-3