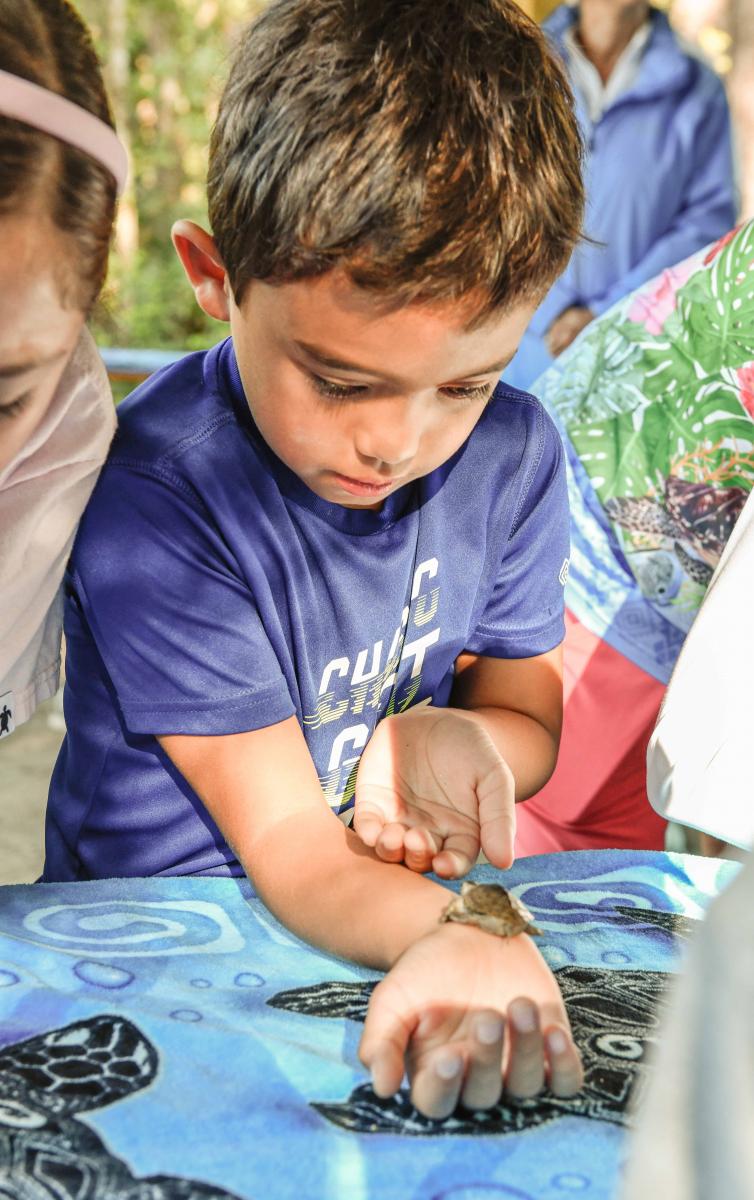 The group, led by Carolyn McInerney, provided a fact-filled rundown on these fascinating animals at the CCA Outdoor Education Center located by the Kids’ Fishing Lagoon (at the intersection of Westcross and Log Landing roads).

With hatchlings on hand, the morning provided a one-on-one experience for the more than two dozen youngsters and parents in attendance. Volunteers present were Dawn Cordo, Pattye Field, Liz Monroe, and Jean Deitch.

McInerney explained that she started collecting eggs 17 years ago and placing them in sand-filled flowerpots on her front deck. When the hatchlings would appear in 60 to 70 days, she would walk them down to the marsh and release them. At the same time, she saw female Diamondbacks laying their eggs in the bunkers on the third hole of the Plantation course and was alarmed by the destruction of these nests by crows and raccoons within a few hours.

Her concern prompted the formation of the Diamondback Terrapin Rescue Project, which was adopted by Skidaway Audubon in 2010. Today, volunteers patrol five holes of Plantation during the nesting season. In 2018, 2,822 eggs were collected, and 2,595 hatchlings were released. “If left to Mother Nature, the survival rate is equal to that of Loggerheads, about one percent,” McInerney explained. “We have no definitive proof but surmise that we have close to a 20 percent survival rate for our program.”

Dave Devore, President of the Skidaway CCA Chapter, said, “We are very pleased with our partnership with The Landings Association in providing youngsters and their families a closer look at our island’s rich natural environment and the native species that inhabit our barrier island world.”

This article was originally published by The Landings Association on their website. Visit landings.org to read the original article. https://landings.org/news/2019/10/01/talkin%E2%80%99-turtles-cca%E2%80%99s-cast-away-club-gets-terrapin-talking-points