The vast majority of the Public Works Department, in conjunction with BrightView Landscapes, came into work on Monday, the Labor Day holiday, to continue in the preparations for Hurricane Dorian’s potential impact on the community. Preparations on Monday included cleaning and clearing debris from storm drains, sweeping the streets, collecting downfall on center islands, rights-of-way and courtyards, performing checks on facility generators, small and heavy machinery and ensuring all equipment and vehicles were ready for storm clean-up.

On Tuesday, Public Works staff and BrightView continued to check problem storm drains, sweep the roadways and collect any downfall located on common property. All pertinent heavy equipment (bobcat, backhoe, dump trucks and trailers, etc.) and trucks were staged along the inbound lane near the Diamond Causeway Bridge.  This staging area has proved to be the most optimal location for the department’s equipment to conduct recovery/clean-up efforts. In addition, the lagoon crew opened eight control structures to lower the lagoon levels to be able to withstand excessive rainfall.

On Wednesday, Sean Burgess responded to a security call regarding two felled trees (a pine and an oak) on Franklin Creek Road North. Burgess immediately cleared the roadway and staff followed up with the removal of the trees on Thursday.

The Public Works Department (and BrightView) returned to work on Thursday morning and began clearing roadways and removing felled trees on Lillibridge Crossing, Franklin Creek Road North, Log Landing Road, Sky Sail Lane, the Main Gate, Landings Way at Tidewater Way and Mercer Road. The department also broke up into teams to rake and collect the debris from the roadways.  The raking crews were followed by a street sweeper to remove the smaller debris items. To date, all primary roadways have been cleared and staff is currently addressing secondary roadways and community paths.  Additionally, BrightView has 12 staff members dedicated to downfall pick-up and are systematically working throughout the community.  Their crews are also conducting mowing cycles to get back on schedule. 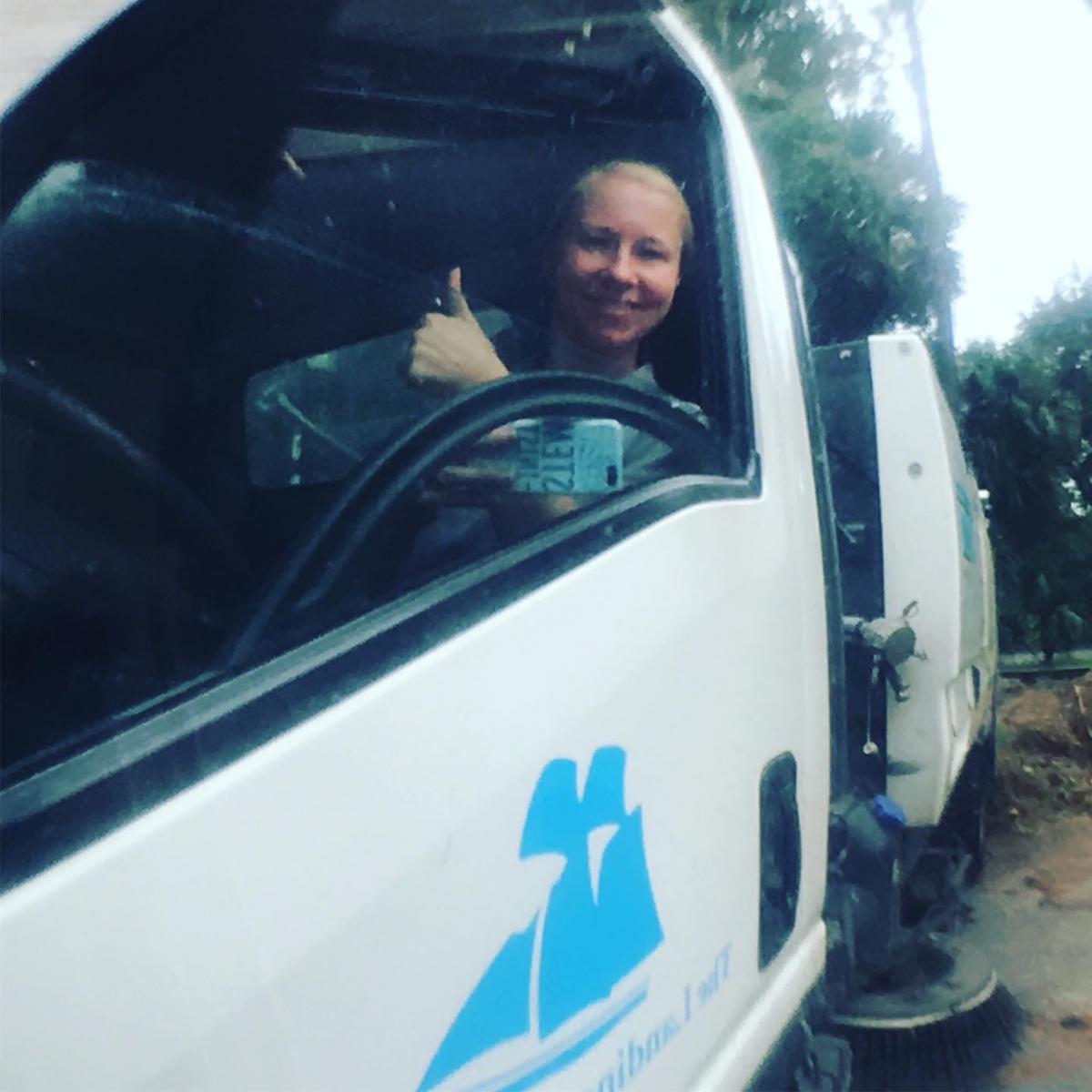 A special shout out to Kristin Peney, Community Programs Manager, for helping with the clean-up on Thursday! She operated one of our street sweepers(see photo at right) and we are grateful for her willingness to help us! Kristin holds a Commercial Driver’s License (CDL) from her school bus driving days.

The construction crew will be onsite Saturday sweeping the streets.  BrightView will also have crews conducting downfall collection ahead of the mowers.

Jason Alstad started this week as the department’s new Environmental Manager.  Hurricane Dorian didn’t give him the opportunity to be eased into his position, but he was able to jump right in on Thursday and start working with the tree crew in the removal of felled trees along the roadways. Jason grew up on Tybee Island and went to high school in Savannah where he went on to earn a degree in Natural Resource Management.  In his free time, Jason enjoys all things water related from sailing, diving and surfing. Jason is married and has a new baby on the way!

This article was originally published by The Landings Association on their website. Visit landings.org to read the original article. https://landings.org/news/2019/09/06/public-worksworking-you