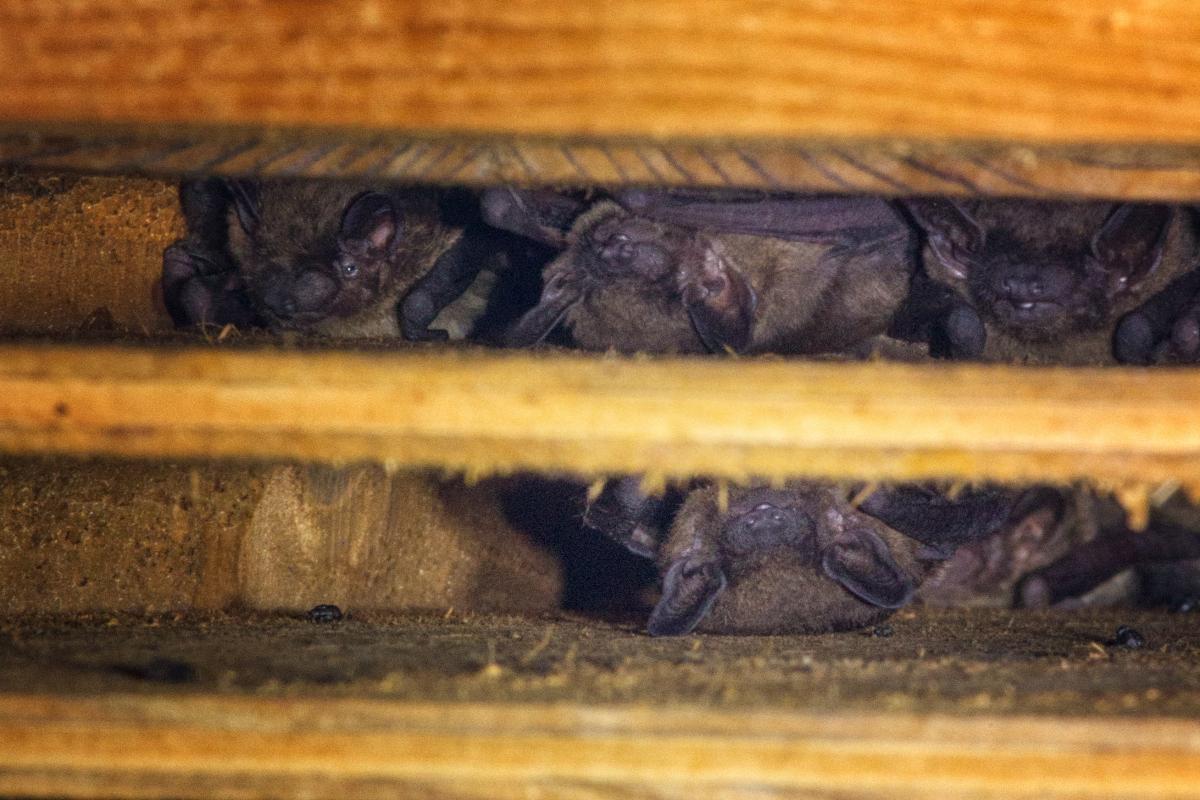 Bats! Love them or hate them, they are fascinating animals that make up 20% or more of all species of mammals. They are the only flying mammal and can live approximately 30 years. What feeds our curiosity about bats is that they are elusive and difficult to study. Bats are the creatures of which stories are written and movies made, mostly to scare us! They are the perfect foil, as it were. Bats are not beautiful like birds or majestic like raptors, or cute like rodents. Bats are indeed that twilight animal with sharp teeth that have an erratic flight pattern, hang upside down, drop out of their roost, and stretch out their thin-skinned wings as they begin their jerky flailing dance in the sky. They are the proverbial weird animal on the block, and we tend to give them a wide berth because we view them as unpredictable. They are both mysterious and amazing.

Here is what we know: There are approximately 1,240 species of bats that are divided into macrobats and microbats. They are an important part of our ecosystem, and depending on where they live, they can consume up to their body weight in insects each night. Bats consume pests that are detrimental to garden plants and the larger agricultural economy. These pests include corn earthworm moths, beetles, mosquitos, bollworms, and larvae. They also consume pests that invade the crops of corn, melons, soybeans, and cotton grown in Georgia and around the country. In fact, bats have saved cotton farmers in Texas alone more than $6 million annually. They are, indeed, a great natural pesticide. Bats that live in the Gulf of California can consume fish and crustaceans. Other microbats eat lizards and small birds; and birds, in turn, will kill bats. Nectar bats consume nectar and pollen from agave, saguaro, and organ pipe cactus. They move from plant to plant and pollinate, much like the hummingbird. These bats annually migrate into the Southwest United States from Mexico. This same species lives and thrives in parts of Asia.

Vampire bats prefer tropical climates, mostly in Central and South America, where they feed off the blood of cattle, horses, and birds (and the occasional human). All of these bats are considered microbats because of their size. The largest bats (sometimes called megabats) are fruit-eating bats. They can have a wingspan up to 6’ and weigh up to 2.6 pounds. Megabats are referred to as flying foxes, as their long snout makes them resemble a fox. However, the smallest Megabat can be smaller than the largest Micro bat. Bats can be found all over our planet except for the Arctic and Antarctic regions.

Bats are considered nocturnal because they groom and sleep during the day then hunt, communicate, and mate during the night. However, bats fall into that group of animals that come out during twilight, both dusk and dawn, known as crepuscular behavior. Bats have good eyesight and can see very well during the day, but twilight and night enhance their chances of not being seen by predators, and it also increases the window of time for bats to hunt and feed. Most diurnal (day) birds of prey have exceptional eyesight. What they don’t have is the high sensitivity of smell and sound like owls (whose eyesight is blurry during the day).

In the Savannah River District, we are home to approximately 12 species of bats, all insectivores. At The Landings, we are trying to increase our colonies, not in species but actual numbers of bats. GA DNR notes that a single bat can consume hundreds of mosquitoes in one hour, which in one night would be equivalent to their body. While these native bats consume large quantities of mosquitoes, moths, and beetles, there still are plenty of insects left behind. We never can have too many bats, but the question becomes how to attract them? We are aware that bats roost in dead trees, Spanish Moss, homes, and sometimes well-placed bat houses.

Skidaway Audubon has placed seven bat houses over five golf courses at The Landings. We spent a year researching, discussing, and planning our project, knowing that much of attracting bats is hit or miss. We also know attracting bats is a wait and see process. The general thought is to give the bats two years to find and occupy the bat house. If unoccupied after this window, then moving the house is recommended (and waiting up to another two years). We recently began our first phase, to monitor well-placed bat houses for occupation to increase the bat population on Skidaway Island. We understood going into this project that bats may or may not occupy the erected bat houses, but we took our best shot. The houses were constructed by a group from The Landings Woodworkers Guild using plans from Bat Conservation International. Placement sites were selected by The Landings Golf Course Management teams considering sun orientation, freshwater, and nearby shelter. Bat house poles of aircraft aluminum with mounting sleeves were installed using cement with the understanding that they may be moved in the future.

We are hoping for a colony of female bats to fill our houses, making it easy for males to find a large population of partners with whom to mate in the future. Females reach maturity and begin mating at around 14 months of age, and pregnant females will join a maternity colony for warmth and security. The females will colonize a multi-chamber roost, resulting in a population anywhere from 50 to 200 bats. Gestation is approximately 40 days. However, the female can manipulate the time of pregnancy and hold off the implantation of the egg for fertilization up to six months because of food shortage. Good sources of food will allow the insectivorous female bat to birth one or more pups per pregnancy per year, although they can give birth to twins.

The bats in our area weigh between 5.5 grams and 20 grams (that is between 1/4 ounce to just under an ounce), so it is difficult for the mother to fly, feed, and shelter more than one pup at a time, as she solely is responsible for the feeding and training of her pup. Each female will deliver her pup while hanging upside down and will probably catch the pup by cupping her wings. The pup will continue to nurse from the mother until its wings are developed. The mother will hunt and return to the roost several times each night to feed the pup, who will attach itself to the mother’s furry belly to nurse and to sleep. At around day 25, the mother will begin teaching the pup to flap its wings. If this training is interrupted, the pup will perish. Once the pup’s wings are developed, it will begin the process of finding its own food. In the Savannah area, our nine-to-12 different species of female bats will roost together during the birthing, maturation, and training period from mid-March through August each year. Males, unlike the females, generally will roost alone.

Further awareness and knowledge of our bat population will grow as we learn more from our bat house project. We expect this to be a very slow process, as the success of occupation can take up to two years, and we are only three months into erecting our bat houses. For now, watching their erratic flight in our evening sky is both entertaining and educational, so enjoy the show. For more information about this project, follow our progress at  SkidawayAudubon.org as we work to increase the bat population at The Landings.

Notice: Recently, we found a good size colony in the bat house on Magnolia #18 Tee Box by the Bluebird house. We have downloaded a video of the bats leaving the box at dusk on our Facebook page. For good viewing, stand just south of the bat house at about 8:45 p.m. to watch the bats drop and swoop out of the house as they begin their evening hunt. Enjoy!

Program Update: Friends of Skidaway Audubon (FOSA) will be hosting Katrina Morris, a bat biologist from GA DNR, at 6:30 p.m. on September 10 at Messiah Lutheran Church. Morris will speak about Mist Netting Bats. Admission is free to FOSA members and $5 at the door for all others. Please join us for a very educational evening. This will be Morris’s second visit to our community, and we are looking forward to another great event!

This article was originally published by The Landings Association on their website. Visit landings.org to read the original article. https://landings.org/news/2019/09/03/audubon-bat-houses%C2%A0%C2%A0