Letter to the Editor

Letter to the Editor

Are you one of the folks that turned on your water on July 17, and only a trickle ensued? If so, then you are one of the residents impacted by the recent water main break at Landings Way South and Westcross. I happened to drive by soon after the rupture (approximately 2 p.m.), and the amount of water flowing into the lagoon was astonishing. I came back by in my golf cart a bit later when Landings Way South was closed, and there were trucks, large equipment, and people everywhere. A VW would have been lost in the hole they had dug! All this, yet I had only experienced a short period of lost water pressure. I found this amazing and began asking questions.

First, a bit of luck. There were water cut-offs at Westcross and Huntingwood so they could isolate the break affecting only The Landings Association (TLA) and the Athletic Field. Utilities, Inc. (UI) mobilized their equipment, and TLA provided some as well. TLA sent out traffic alerts and dispatched employees at all detour points to direct traffic and answer questions. Traffic moved smoothly were I drove.

Just before midnight, the new pipe was in place, the hole filled, and gravel spread, allowing traffic to move again (fewer than 10 hours from the main break to resolution!). Of note, Ron Medders of UI says that even though the break was quickly isolated, they lost 700,000 gallons of water (which thankfully went directly into a lagoon, over its overflow, and into the marsh)…no flooded homes or gardens.

Thus, there was little or no consequence to most Landings residents. What could have been a major catastrophe wasn’t thanks to the rapid and effective response by UI and TLA, and a bit of luck, of course. I, for one, think we should all be very proud of our home team and say thank you to our Public Works and Utilities, Inc. friends the next time we see them. 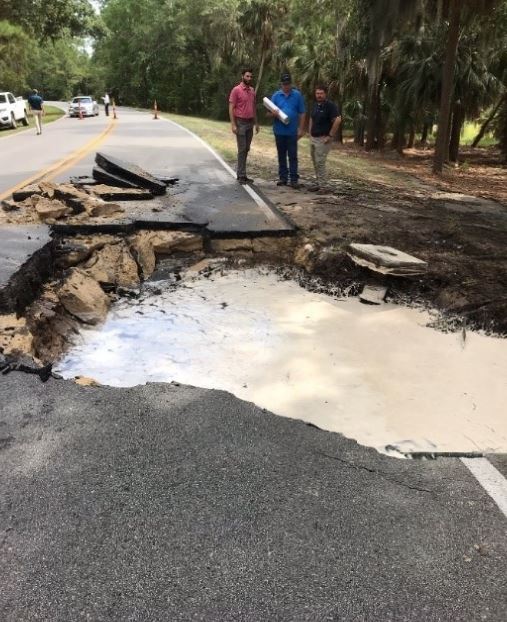 Utilities, Inc. and Landings Association staff worked late into the evening to repair and reconnect the broken water main. After the main was repaired, they were able to compact the soils of the roadway and place a gravel base on top of the road to allow for this area to be reopened until arrangements for repaving could be made.

This article was originally published by The Landings Association on their website. Visit landings.org to read the original article. https://landings.org/news/2019/08/27/letter-editor