As of Friday, Absolute Concrete has completed the section of path conversion from Westshell Court to Kittiwake Lane in the Deer Creek phase of the community.  In-house staff continues to follow behind the contractor to backfill the areas alongside the paths. 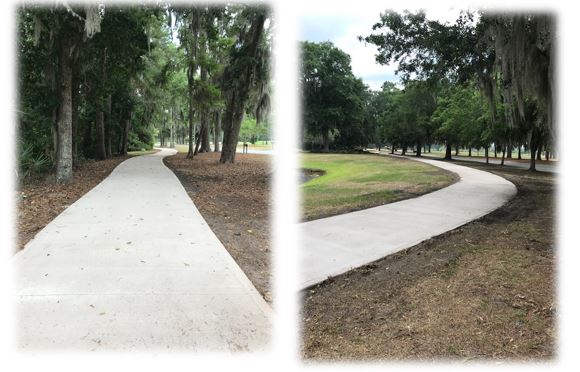 Although rain is forecasted for next week’s Turf Field Day on June 11, staff is continuing to make preparations and nail down vendors for the event.  As a reminder, the event will be held from 4:00 p.m. to 7:00 p.m. at Landings Harbor Park.  The event will feature local vendors and landscape contractors along with presentations by TLA Staff, Utilities, Inc., BrightView Landscapes and TLC Staff on Shallow Wells, Turf Management, Irrigation Best Practices and State Water Restrictions.  Bowtie BBQ and Ben and Jerry's food trucks will be onsite and the Landings Harbor Tiki Bar will be open for the evening (accepting cash only for purchases).  It’s an event that you don’t want to miss!

On Thursday, Bennett Paving completed paving Night Heron Lane, Bellemeade Court and Liberty Place. The contractor intends to progress to Franklin Creek Road South and Activity Drive next week. As an aside, we have attempted to reach out directly to residents who have posted on social media about a specific street or pothole. Two such residents were called this morning. Separately, Sean Burgess called Joe Welch (who Sean works with on vehicle trade-in pricing at J.C. Lewis Ford) earlier this week to address his post about wasting money on streets and gates, among other issues. Mr. Welch returned his call but advised he couldn’t talk at the time. 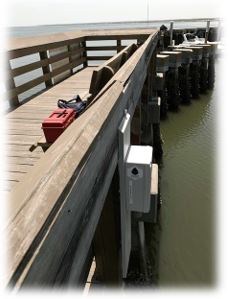 The Smart Sea Level Sensors project is a partnership between Chatham Emergency Management Agency officials, City of Savannah officials, and Georgia Tech scientists and engineers who are working together to install a network of internet-enabled sea level sensors across Chatham County.  The real-time data on coastal flooding will be used for emergency planning and response. The Project is one of four State grant projects funded under the Georgia Smart Communities Challenge. The Landings is part of the larger Chatham County grant program. The strategies developed by the grant recipients are meant to serve as models that could be implemented elsewhere to advance smart technology and improve community well-being across Georgia.

One of the sea level sensors was successfully installed inside the wall at Landings Harbor Marina by Russ Clark (Director of Mobile Technology and loT Programs for Georgia Tech).  The next steps are as follows, barring any complications: install a permanent, outdoor antenna on the roof peak at the Landings Harbor Marina Office along with a mounted gateway and hardwired ethernet, install a second sensor at Landings Harbor Marina on the outside of the breaker wall (potentially on the fish cleaning house), install/mount a gateway on the tower roof of the Delegal Creek Marina and install a sensor on the dock at Delegal Creek Marina.  This project will be ongoing throughout the summer and updates on its progress will be provided as each component has been completed.  In the interim, the data from the sensor at Landings Harbor Marina is visible on a prototype dashboard.  As the project progresses, the application development will also receive technology upgrades and improvements along the way.  Feel free to visit the below link to access the data by clicking here.

This article was originally published by The Landings Association on their website. Visit landings.org to read the original article. https://landings.org/news/2019/06/07/public-worksworking-you