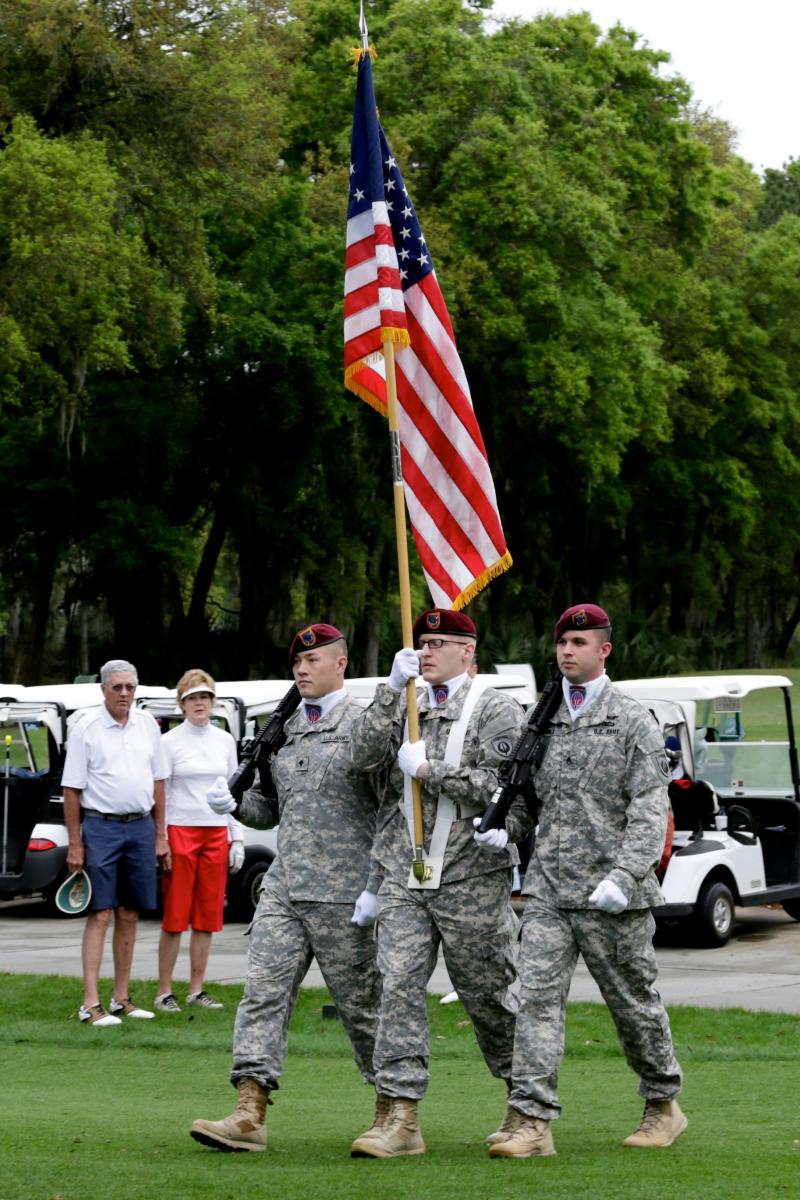 “No greater honor can be bestowed upon a soldier than to be recognized by his peers. The men in this formation and their Companion Battalions of the 75th Ranger Regiment have relentlessly hunted down the Islamist State insurgents and killed or captured more than 1,900, in hundreds of special operation engagements, as we bring our determination to the enemy. Unfortunately, the battle is not over, and these men will continue the mission.”

Seventeen of our 1st Battalion Rangers were recognized: one Silver Star, eight Bronze Stars for Valor, five Joint Service Commendations for Valor, and three Purple Hearts. Gerry and I were honored to represent the Landings community and our Landings Military Family Relief Fund. The current Ranger Commander, LTC Sean McGee, introduced us to Schwartz, explaining that the LMFRF is a wonderful example of community support.

“Please stand, attention to orders,” the master of ceremonies spoke as the event began. “Master Sergeant Phillip Paquette, while under enemy fire, exposed himself numerous times to save not only a special operations comrade, but also a number of Afghan soldiers! He then called in air strikes to suppress the threat, saving other comrades from possible harm. For his actions, he is awarded the Nation’s third highest valorous award, The Silver Star.” He then continued to announce each of those Rangers receiving awards.

Perhaps the most heartbreaking moment, which I can’t do justice to in this article, was the moment that SFC Christopher Celiz was posthumously awarded the Bronze Star with Valor device. Two magnificent Rangers in full dress uniform escorted his eight-year-old daughter to center stage. Schwartz hung her Daddy’s Bronze Star, on a ribbon, around her neck. She was so brave, like her Daddy, and being so young, she toyed with the medal as she returned, with her escorts, to her seat of honor. Someday in the future, she will treasure this memory, but it will never replace her loss. What special people these families are, and how proud our community can be, that they accept us as family.

With all that is going on in our nation, in our state, and even in our community, how trivial our infighting seems, when we witness the sacrifices these volunteer warriors and their families make every day, so that we may have the freedoms to do what we do and say what we say!

Please know that the Rangers appreciate our support and send a message of thank you for all we do, not just for the Rangers but also for the 3rd ID and all units in the Savannah area.

Our sacrifice of financial support pales in comparison to their sacrifice of service, in repeatedly placing themselves in harm’s way.

How Can You Help?

Donations received are used to help the Military and their families. Please make checks payable to SCF LMFRF (and include your address on your check). Send checks to:

All gifts are tax deductible to the extent of the law.

Join our Donor Team and be Landings proud! You can follow the Fund on Facebook at The Landings Military Family Relief Fund.

On behalf of the LMFRF Board of Directors, thank you!

This article was originally published by The Landings Association on their website. Visit landings.org to read the original article. https://landings.org/news/2019/03/21/attention-orders-1st-battalion-75th-ranger-regiment