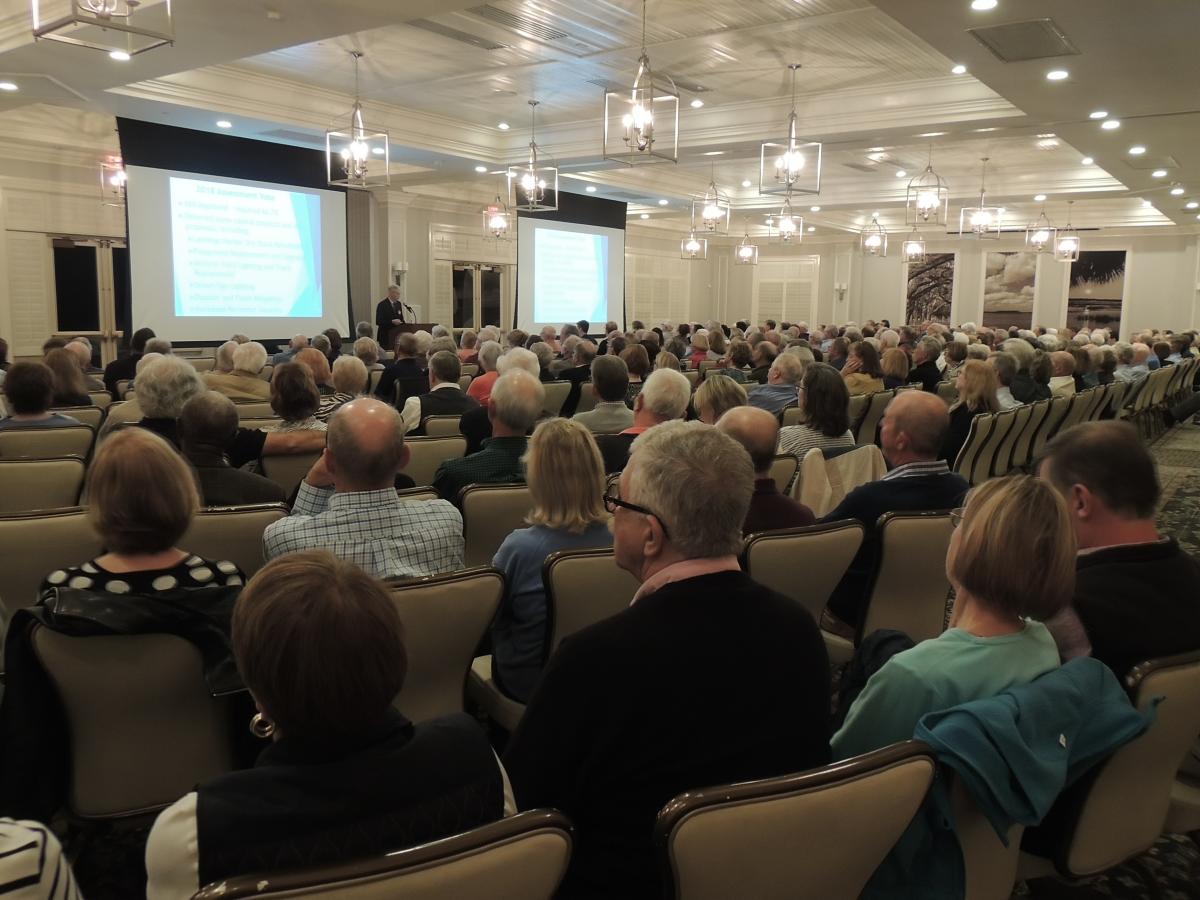 More than 300 residents turned out for The Landings Association’s 2019 Annual Meeting on Thursday, February 28 in Plantation’s Ballroom.

2019 Landings Association President LeeAnn Williams opened the meeting, welcomed the group, and gave an overview of the agenda for the meeting. She then introduced 2018 Landings Association President Rick Cunningham, who recognized retired Directors T.J. Hollis and Joyce Marble for their service on the Board. He then recognized 2018 Volunteer of the Year Bob Longueira for his work with Adaptive Golf Clinic for Challenged Veterans, Habitat for Humanity, Kiwanis Club of Skidaway, Landings Military Family Relief Fund, and Landings Security Gate Volunteer, to name just a few of the organizations for which Longueira volunteers. Cunningham then acknowledged the 2018 Volunteer Group of the Year – Sustainable Skidaway. The group spearheaded the effort which led the Landings community to earn the designation as the first sustainable community in Georgia in 2018.

Cunningham covered some 2018 highlights for The Landings Association. Topping the list was The Landings being named the first Audubon International Certified Sustainable Community in Georgia, Renovation and Renewal Initiatives for aging properties, preparing for 5G, completing storm renovation after Tropical Storm Hermine and Hurricanes Matthew and Irma, the unsuccessful 2018 Assessment Vote, and Incorporation Status. Following are some details on each of the subject areas.

2018 Treasurer Joyce Marble covered the financial results for the Association and its subsidiary, The Landings Company. She shared with attendees that for the 2018 year-end, the reallocation for The Landings Association’s Annual Assessment was adjusted from the original budget, to transfer $685,100 to the Capital Reserve Fund. This was possible because there were several expense account line items that were under budget as well as several revenue line items that were better than budget expectations, and the Association also reduced the cash on hand in the Operating Fund.

Marble reported that The Landings Company continues its upward trend in leading home sales and expects an even stronger 2019.

“The Annual Report containing the 2018 audited financial statements and an excellent review of the financial and operating results has been posted on the Association’s website,” she said. “I hope you will take the time to visit the website, where you can download or read the report online.” 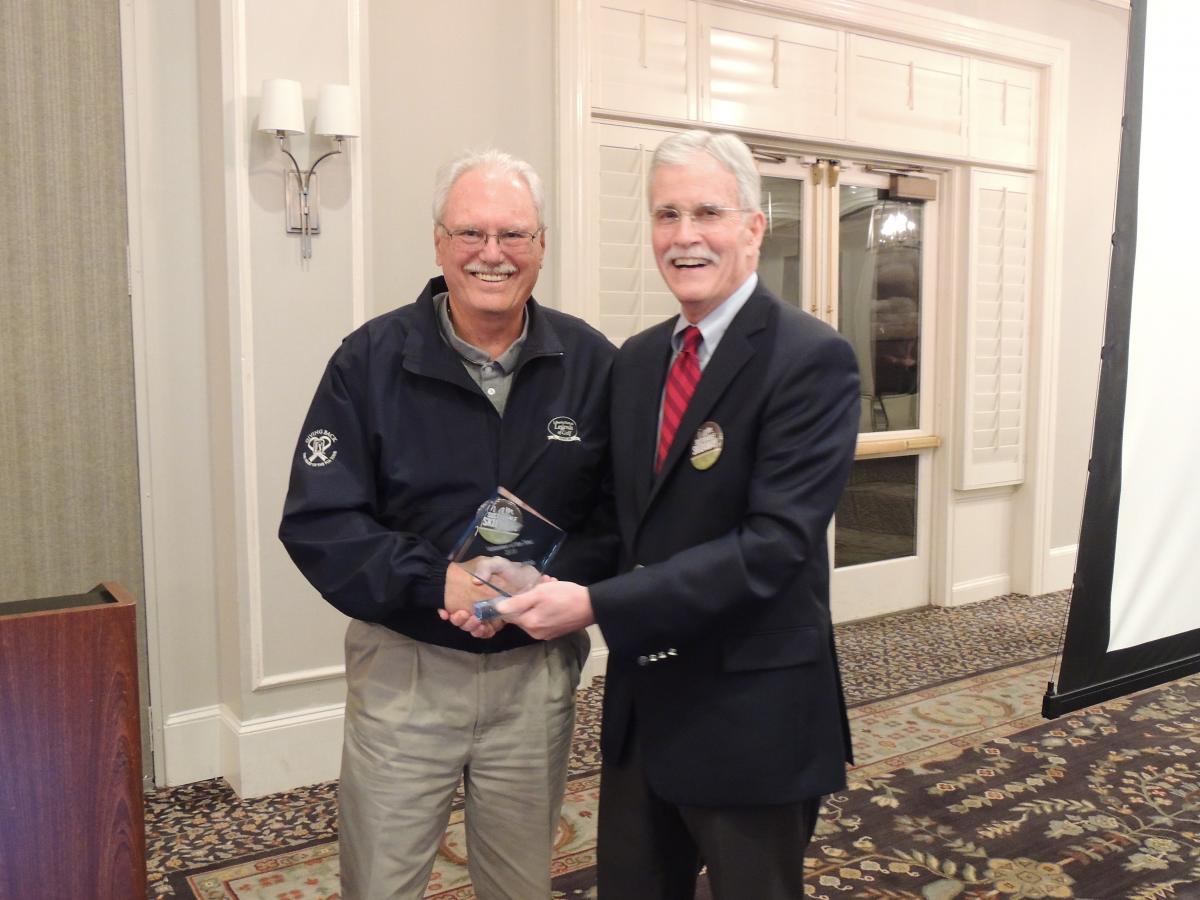 2018 Landings Association Board President Rick Cunningham (right) poses with Mal Welch (left) who accepted the award for 2018 Volunteer Group of the Year on behalf of Sustainable Skidaway.

This article was originally published by The Landings Association on their website. Visit landings.org to read the original article. https://landings.org/news/2019/03/01/2019-annual-meeting-highlights

A great shot of the Skidaway wildlife. ... See MoreSee Less

Mmmm.... Lobstah....Take your tastebuds for an adventure with the new menu at Deer Creek a Coastal Grill, premiering next week. Menu highlights include our gluten-free Maine Lobster Risotto! #landingsclublife ... See MoreSee Less

The Kiwanis Club of Skidaway has announced that they will be hosting U.S. Rep Congressman Buddy Carter on January 14, starting at 7:45 a.m. at the Palmetto Club.

Be sure to RSVP to Club Secretary Jim Smart (smartsville@aol.com) if you are interested in attending!

Maybe someone can ask him why he joined a lawsuit suing Georgia, and why he bought land in Camden County while trying to legislate a space port there. Shameless grifter.

Pajamas and Hot Cocoa - what could be better??? Tonight at The Deck!

Members and guests only, please.Join us on December 23 for our Christmas Eve Eve PJ Party at The Deck!

Hot cocoa, crafts, and cookies will be available for the kids, and the bar will remain open until 10pm! Don't miss a special visit from Chris Kringle himself from 6-8pm.

No reservations are required for this complimentary event! ... See MoreSee Less