Join LAA on March 7 from 5 to 6:30 p.m. at Plantation Gallery for an opening reception featuring the works of Mimi Diamond and Margie Sone. Diamond and Sone’s work will be featured until April 2. The public is welcomed to attend this event and refreshments will be available.

Art collector Jordan Schmitzer said in a recent edition of The Wall Street Journal (1-26-19) he would like everyone to experience art’s exhilarating effects. “It (artwork) takes you away from your issues of the day and refreshes you, distracts you and maybe helps you think more clearly about your problems.” One can’t think of a better reason to join Artists of the Month Mimi Diamond and Margie Sone for a reception in The Plantation Club gallery celebrating the opening of their latest exhibit of paintings and jewelry.

Mimi Diamond is presenting a very special collection of work, which includes six collaborative oil paintings (like the one shown at right). When her friend Jackie Huntly asked if she would like some of her father’s old canvases, Mimi, of course, said yes. What she found, however, were canvases that were not blank, but rather 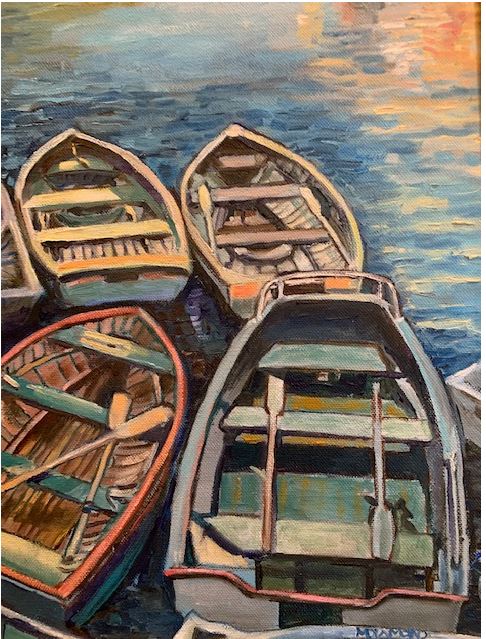 unfinished oil paintings by Jackie’s father, Dr. John Higginson (d. 2013). According to Mimi, “John was a fabulous artist. In addition to being a member of the Landings Art Association, he had taken classes at the Corcoran School of the Arts and Design, as well as SCAD. His artistic style varies between Impressionism and Expressionism and is at times whimsical. John was a brilliant man who trained as a pathologist and became internationally known as an expert in the field of epidemiology of cancer and its environmental causes. He was the first Director of the International Agency on the Research on Cancer. He took up painting and drawing in his later years, which was, in fact, a reconnection to a pursuit he had enjoyed in his youth.”

Mimi decided she could not paint over the canvases of such a brilliant mind. Instead, she decided to rework his paintings, attempting to interpret which famous painter was influencing each piece. One, for example, has a Marc Chagall feel, while another is reminiscent of Henri Matisse. Another painting evokes the work of Paul Cezanne. Some of the paintings she reworked entirely with just his colors left as an underpainting. Others, like Woman and Child Under Tree with Animals and The Foragers, are mainly John’s work enhanced by Mimi.

A professional artist, Mimi has been drawing since a young child and painting in oils since the age of 10 when she won her first award at an art show in Ocean City, New Jersey. Primarily a landscape painter, she has a “joy of the moment” approach where she attempts to capture the glorious conditions of the day or the experience of the beauty of an individual or scene.

Mimi is represented by Signature Gallery in City Market and exhibits at the Savannah Art Association’s Gallery and the Gallery at Savannah/Hilton Head Airport, as well as the LAA venues here. Her website is mimidiamondart.com.

Much of Margie’s work is done with Larimar (like the necklace at right), a dreamy, Caribbean semi-precious stone, which she fashions into shimmering silver earrings, necklaces, and bracelets. The sea-green to dark-blue hues of Larimar, ever-changing, belie its source: an inactive volcano in the southwest mountains of Margie’s native Dominican Republic. Margie explains, “The quantity of this stone is unknown, which makes the supply uncertain.”

Margie cuts slabs of Larimar into a variety of shapes, using her artistic sense to create attractive jewelry, often using combinations of stones, including coral, agate, freshwater pearls, tourmaline, and jade. “Every day I make jewelry, even if I have only half an hour,” Margie says.

Margie often can be found in her studio, magnifier on her head, using pliers and cutters to create her art. Also an accomplished painter, Margie has won numerous Landings Art Association awards for her oils and acrylics and has received several awards in area jewelry shows. Her work is represented by Savannah’s Signature Gallery in City Market, the Downstairs Gallery on Gordon Street, and the Savannah Art Association Gallery on Bull Street. 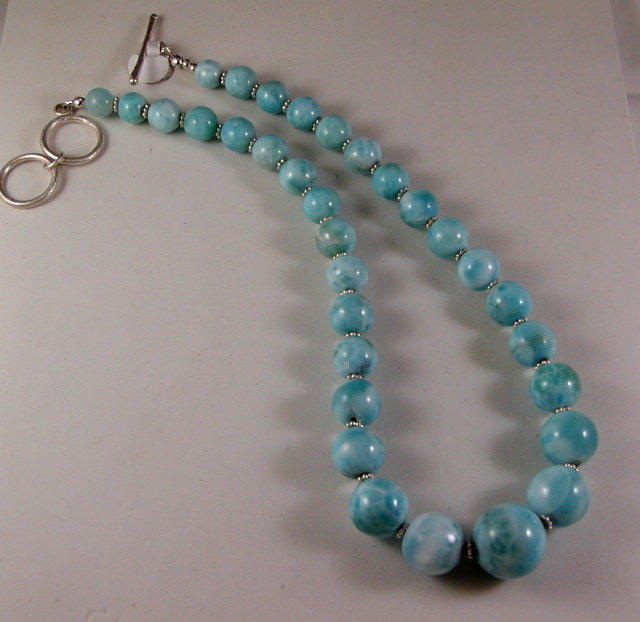 Margie currently serves on the Board of the Landings Art Association as Program Chair. You can email her at margiesone@hotmail.com.

This article was originally published by The Landings Association on their website. Visit landings.org to read the original article. https://landings.org/news/2019/02/20/laa-announces-march-2019-art-exhibit