On Wednesday, March 23, Security and Chatham County Police Department (CCPD) responded to a residence on Sandsfield Way for a reported vehicle theft. A contractor reported his vehicle was stolen by two employees he had just terminated. A Security Officer located the vehicle in question, and after getting the driver to pull over, convinced him to return to the construction site. The driver stated they were taking their tools back to their house and had planned to return the vehicle when they were finished. The contractor did not wish to pursue charges.

Security received a report of noise complaint regarding a residence on Springfield Place on Friday, March 25. An officer spoke with the homeowner, who stated that he had guests at the house with small children who were probably making some noise. He advised his guests of the complaint, and no further issues were reported.

On Saturday, March 26, Security responded to a residence on Tidewater Way for a report of a noise complaint. The homeowner was having a party with music. The officer advised the resident of the complaint, and he stated that the noise would stop. No further complaints were received.

A resident on Canticle Lane reported hearing six gunshots in rapid succession on Friday, March 25. Immediately following the gunshots, the resident reported seeing a dark vehicle speed off. Officers patrolled the surrounding areas with negative results. No further gunshots were heard or reported. TLA Security Officers are not armed, and we strongly urge residents, guests, employees, and vendors to call Chatham County Police Department first for any suspicious gunshots.

While attending the International Security Conference & Exposition (ISCWest), staff spoke with several vendors specializing in gunshot warning/detection devices. They are hopeful to have a more economical solution for large outdoor applications within the next two years.

While attending the conference, staff met with a vendor who provides Bluetooth-enabled padlocks. This type of padlock may offer a better solution to securing our RV yards than our current keyed padlocks. 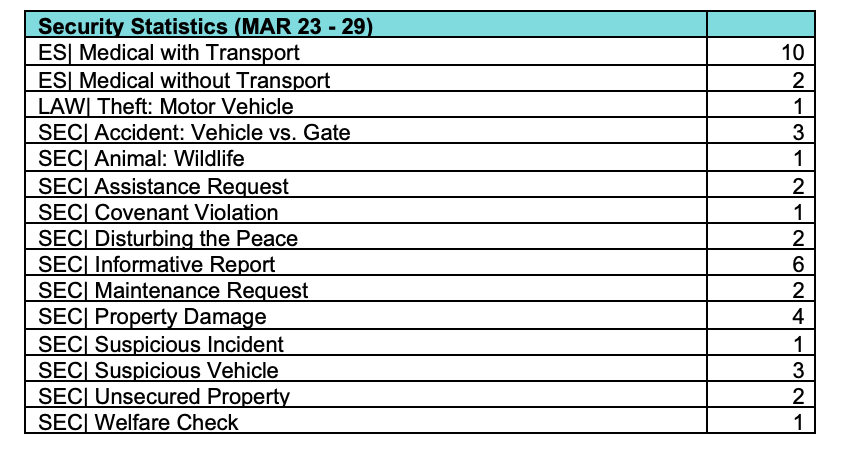 This article was originally published by The Landings Association on their website. Visit landings.org to read the original article. https://landings.org/news/2022/04/01/security-scene