On Wednesday, February 9, Security responded to a residence on Carlow Lane for a report of an unauthorized fire. Upon arrival, officers found that the resident was burning trash, pine straw, and various sticks and branches. The officer informed the resident of the Rules, and the resident put out the fire. Nothing was damaged by the fire.

Security and Chatham County Police Department (CCPD) responded to a three-vehicle accident on Tidewater Way just before the Main Gate on Thursday, February 10. The first vehicle rear-ended the second vehicle, which in turn rear-ended a third vehicle. No injuries were reported. CCPD cited the driver of the first vehicle for following too close. One vehicle was removed from the scene via tow truck.

On Friday, February 11, Security responded to Landings Way North and Bartram Road for a single golf cart accident. The resident was picking up trash along the bank of lagoon when he misjudged the slope and drove the cart into the water. He was able to pull himself out of the water and did not sustain any injuries as a result of the accident. Unknown individuals stopped and assisted removing the cart from the lagoon.

Security and CCPD responded to the rear parking lot of TLA’s Administration Building on Friday, February 11, for a report of a hit and run. The resident advised that he was walking his dog on the Nature Trail, and upon his return to his vehicle, another resident informed him that someone had hit his vehicle while exiting the parking lot. A description of the vehicle and a partial plate number were provided by the witness. A review of the Avigilon camera was able to view the accident, but the tag number could not be retrieved. Although the vehicle in question has not been located at this time, a potential vehicle has been identified and will be shared with CCPD for further investigation. As a reminder, leaving the scene of an accident with injuries or property damage is a criminal offense.

On Saturday, February 12, Security responded to TLA’s parking lot for a report a suspicious incident. Officers spoke with two juveniles, who stated they had left The Deck a few minutes prior and were headed to the Community Park by way of the golf cart tunnel. When they exited the tunnel, an unknown person in a vehicle fired some sort of Airsoft projectile at them. The vehicle proceeded southbound, turned around, and began to fire at them again. Patrol officers canvassed the area with negative results for a vehicle matching the description provided. No similar incidents were reported, and the juveniles were driven home by Security.

Security responded to Cotton Crossing for a report of vandalism on Tuesday, February 15. A resident advised that the railing surrounding the hot tub by the pool had been torn down. The resident spoke with the contractor performing work on the house and learned that he did not remove it. It is unknown when the incident occurred, as the last time the homeowner checked the property was in December. 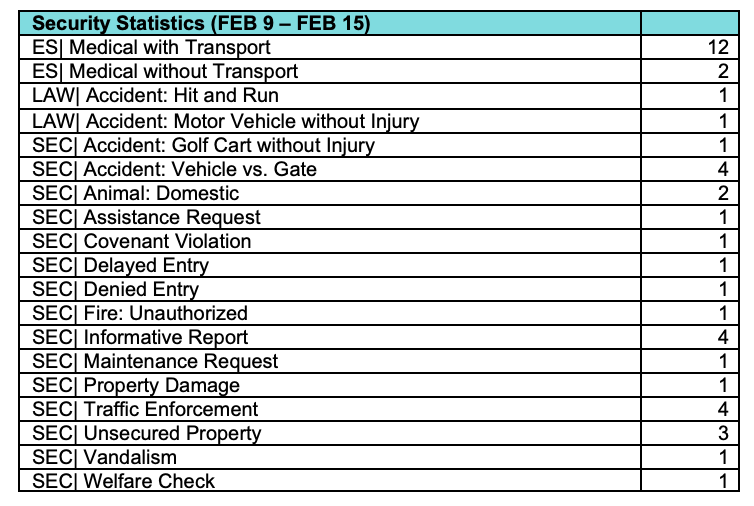 This article was originally published by The Landings Association on their website. Visit landings.org to read the original article. https://landings.org/news/2022/02/18/security-scene