Recently, Security has seen an increasing number of golf carts that are not properly registered with the Association. One such golf cart is cart number 4915. If you are the owner of this cart, please give us a call!  As a reminder, if you purchase a golf cart from another resident, you must register the cart under your name with us. The process is as simple as completing the registration form and providing proof of liability insurance.

Security was called by a resident regarding allegations of a woman brandishing a firearm. Security immediately dispatched Chatham County Police Department (CCPD). Security and CCPD interviewed both parties involved, and no arrests were made. TLA will acquire the police report to determine if any further TLA actions are warranted.

On Sunday, May 30, a resident reported that he was involved in an accident the previous evening. While riding his motorcycle on Landings Way North near Deer Run, the resident struck a deer, which broke the headlight on his motorcycle. The resident advised that he sustained scrapes to his knees and abdomen, and he did not seek medical attention. The deceased deer was located and flagged for removal.

While conducting a premise check on Monday, May 31, a Security officer was approached by a homeowner regarding his mailbox being damaged. He stated that it appeared to have been damaged by a baseball bat sometime during the past four days. It is unknown who may have caused the damage.

Security responded to the area of Priest Landing Drive and Hathaway Lane for a report of a suspicious vehicle on Wednesday, May 26. Upon locating the vehicle in question, the officer noticed there was a young man who appeared to be sleeping inside the vehicle. Once the individual woke up, the officer identified the male as a guest of a resident and asked why he was parked on the side of the road. The young man informed the officer that he had parked there earlier that morning to get some rest, and his friend had taken his keys from him. Contact was made with the resident sponsor who brought the young man his keys.

On Wednesday, May 26, Security responded to the gazebo area off the 15th hole of Oakridge for a report of fireworks being deployed. The officer spoke with an individual, identified as a resident, who admitted that he and his three guests were shooting them. The officer explained the rules regarding fireworks to the individual, who apologized and left the area with his friends.

Security and CCPD responded to Franklin Creek Road South on Thursday, May 27, for a report of a prowler. The complainant advised that he witnessed an individual trespassing on his property. He also stated that they recently had some golf clubs stolen and was concerned the individual may be attempting to burglarize the residence. Officers conducted a premise check of the property and patrolled the surrounding area with negative results. No further incidents were reported, and extra patrols were performed in the area for the remainder of the night.

Security responded to the area of Morning Marsh Road on Friday, May 28, for a report of possible gunshots. Officers patrolled the area and did not hear anything out of the ordinary. No further incidents were reported. 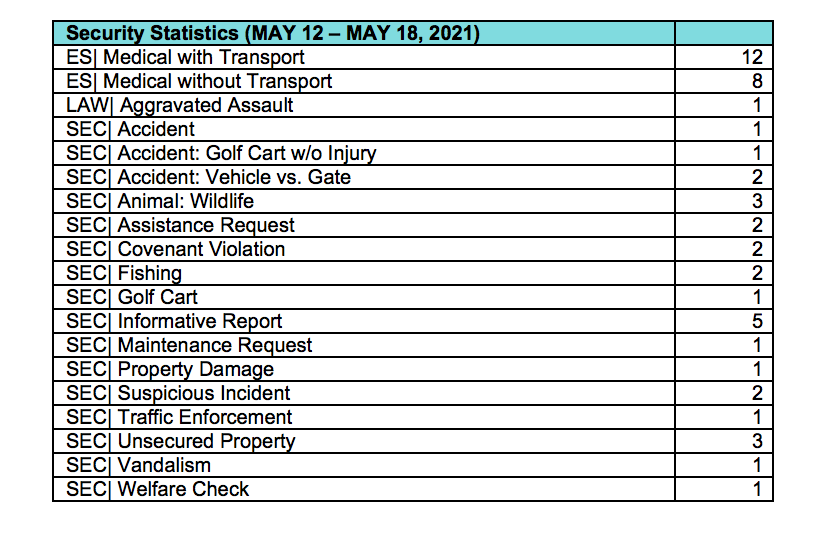 This article was originally published by The Landings Association on their website. Visit landings.org to read the original article. https://landings.org/news/2021/06/04/security-scene

Join the Skidaway Hamiltons and Skidaway Abigails on September 21 at 3:30 pm. via Zoom for a presentation entitled The Landings at 50. The Landings Association’s President John Holmquist is the featured speaker. He will address plans and needs for infrastructure development, housing […]