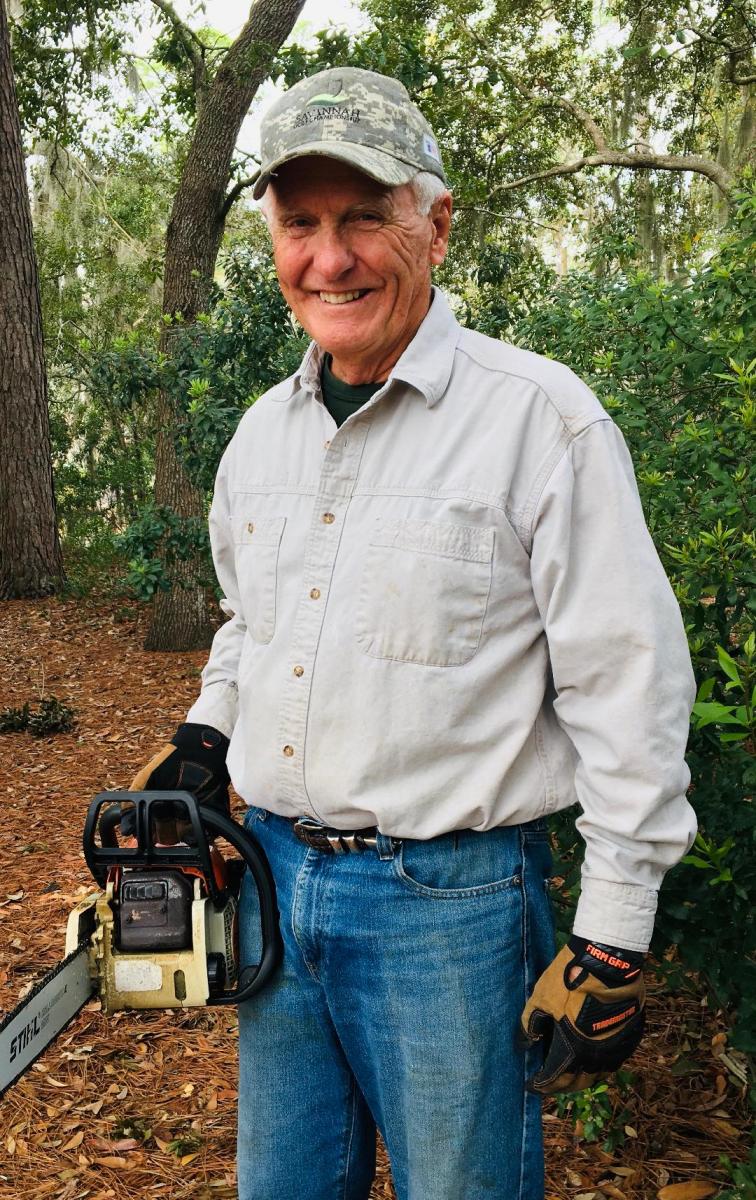 If you’ve ever reached out to the Tallow Terrors to cut down one of those pesky Chinese Tallows on your property, chances are you have witnessed Ed Conant doing one of the volunteer jobs that he loves. Conant is the recipient of The Landings Association’s Volunteer of the Year Award for 2019.

A Landings resident since 2006, Conant believes in giving back to the community in which he lives. Of course, you wouldn’t expect anything less from a career Naval Officer. While in the Navy, Conant served in submarines. Following retirement from the Navy, he moved on to a career at General Dynamics Electric Boat Corporation, where he served as liaison with the Pentagon on submarine funding and development.

When Conant and his wife Joyce moved to The Landings after spending nearly three decades in the Northern Virginia suburbs of Washington, D.C., they wasted no time getting involved with volunteer groups aiming to make the community an even better one than it is already. One such group that Conant joined is the Tallow Terrors. The name may sound a little daunting, but the group’s mission is quite noble – reduce the spread of the invasive Chinese Tallow Trees on Skidaway Island. Conant and his fellow Tallow Terrors take their work seriously, as they realize that no matter how beautiful, not all trees are good to have around.

“Tallow trees are insidious because they will take over an environment and create a monoculture, denying native species sunlight, water, and nutrients,” Conant said. “They are prolific in spreading seeds, that can lie on the ground for years before germinating. When cut down, tallows will grow back if the stump is not treated with a special herbicide. All the Tallow Terrors recognize this threat and are glad to help wipe out tallows on our island.”

Conant said he is humbled to be chosen as the 2019 Volunteer of the Year. “Being selected as Volunteer of the Year from among so many deserving volunteers really is an honor that I am humbled to receive,” he said. “We are fortunate to live in a place where there are so many residents who contribute their time and talent to improve our wonderful community.”

There is no denying that Conant is respected by the people who work with him in all his volunteer associations. Don McCulloch has worked alongside Conant since 2011 as a Tallow Terror. He said Conant has been an integral part of the group’s mission for nearly a decade.

“My personal knowledge of Ed’s service to our community relates primarily to the Chinese Tallow Tree Removal Project, which was initiated by Ann Fenstermacher in 2007,” McCulloch said. “Ann recruited me to become head of a new Tallow Terrors group in November 2009.  Ed joined the group in 2011 and soon became one of its most dedicated and productive members.  In November 2016, Ed took over as leader of the group and quickly expanded the scope and production of results that, quite frankly, I would not have been able to do myself. He continues to work aggressively towards the goal of eliminating all Tallow Trees in The Landings and all of Skidaway Island.”

Landings resident Ann Fenstermacher, who began the Tallow Tree initiative, agrees with McCulloch that Conant has positively impacted the group.

“Ed certainly is responsible for the crowning touch on the 12-year effort to control the invasive presence of Chinese Tallow trees on Skidaway Island,” she said. “His fearless approach to securing permission from private residents to remove tallows from their personal property transformed the project from successful to extraordinary. There is not a seed-bearing tree on Skidaway Island that is safe from Ed’s saw, and that is the crux at the heart of this invasion.”

Most everyone you ask about Conant and his work with Tallow Terrors will tell you he is a “man on a mission” who gets results. Skidaway Audubon President Carolyn McInerney agrees wholeheartedly with this evaluation of Conant.

“Since Ed joined the Tallow Terrors and subsequently became their leader, more than 48,000 Tallows have been removed from The Landings and other property on Skidaway Island,” she said. “He has been largely responsible for expanding the project beyond The Landings Association and The Landings Club properties and incorporating private property owners as well as the University of Georgia lands. Ed’s dedication to the Skidaway Audubon Tallow Tree Removal Project, better known as the Tallow Terrors, is an example of the environmental stewardship that makes our community unique.”

The Volunteer of the Year Award is intended to promote and reward volunteerism at The Landings. The recipients are those individuals who have gone above and beyond expectations to offer their time, talent, and expertise to a cause that benefits others.

To qualify for nomination, the individual or group must be members in good standing at The Landings Association. They must have an exemplary record of volunteer service, which has resulted in enhancing the reputation of The Landings and its citizens and resulted in the improvement of the quality of life and/or the visual beauty of The Landings. Also, the resident cannot have been recognized for this award in the past three years.

Landings Association General Manager/COO Shari Haldeman said she truly is in awe of the amount of volunteerism that takes place at The Landings. She added that volunteers like Conant choose to impact positively the community and shape its character.

“Individuals like Ed Conant exercise responsibility and accountability and display their commitment to making a difference,” she said. “They truly are the foundation of our community, and the Volunteer of the Year program is an opportunity to thank them and celebrate the contributions they make.”

The community today is what it is because of its long history of volunteerism, Haldeman said.

“Today’s volunteers not only are important to what is going on right now in our community, but they are expressing commitment to the future of the community as well,” she added. “The positive work they do will be here for future Landings generations to benefit from down the road.”

John Holmquist, President of The Landings Association’s Board of Directors, agrees with Haldeman that volunteerism has played an important role in shaping the Landings community.

“Volunteerism is an integral part of life at The Landings,” he said. “This is a well-deserved award given Ed’s dedication to volunteerism here. What makes it even more special is that his peers nominated him to receive this acknowledgment. It always is rewarding to be recognized by the people who know you the best.”

This article was originally published by The Landings Association on their website. Visit landings.org to read the original article. https://landings.org/news/2020/03/05/ed-conant-named-2019-volunteer-year