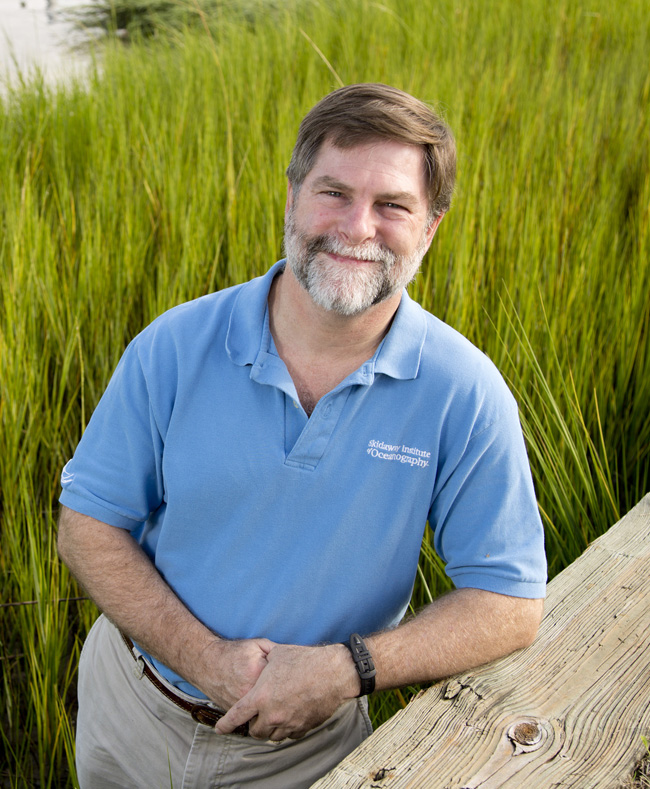 The Dynamic Shorelines of Coastal Georgia will be the focus of the CCA of Skidaway’s September meeting and seminar on Monday, September 9, at St. Peter’s Church beginning at 7 p.m. Dr. Clark Alexander, Director of the University of Georgia Skidaway Institute of Oceanography and a Professor in the Department of Marine Sciences at UGA (pictured at left), will talk about our region’s changing coastal shoreline, past, present, and future. Following two decades of studying sea level changes and their effects, he notes that the levels have risen approximately one foot every 100 years. However, he now feels things are changing drastically. Sea levels are expected to increase in this century at an alarming rate. According to Alexander, the rate of sea level rise is predicted to increase on the order of perhaps two-to-three times faster than it is rising today. This increase will cause huge changes in coastal communities. Alexander earned Bachelor Degrees in oceanography and geology from Humboldt State University in California. He went on to earn his Master’s and Doctoral degree in marine geology from North Carolina State University. He is a coastal and marine geologist who joined the Skidaway Institute as a post-doctoral scientist in 1989 and rose to the rank of full professor in 2003. As a researcher, Alexander has participated in 63 field programs, from New Zealand to Siberia, and has been the chief scientist on 29 oceanographic cruises, with a total of more than two years at sea. He has published 91 papers in scientific journals, and, in the past decade, has received more than $5 million in direct research funding. From 2003-2017, he also served as the director of the Georgia Southern University Applied Coastal Research Laboratory on Skidaway Island. Alexander has been very active on state and regional advisory boards and works closely with the Georgia Department of Natural Resources to identify and address pressing coastal management needs. He served on the Georgia Coastal Marshlands Protection Committee and the Georgia Shore Protection Committee from 1998 to 2006. He currently represents the Skidaway Institute to the National Association of Marine Laboratories and the Consortium for Ocean Leadership. He and his wife, Debbie, have been married for 32 years and have two grown daughters. The CCA’s September seminar raffle will award two lucky winners with a seat on a two-person inshore fishing charter with Captain Stan Allen. CCA is a nonprofit organization with chapters on the Atlantic, Pacific, and Gulf Coasts. For more information about CCA of Skidaway, call Joe Tyson (598-8765). For more information about CCA’s Georgia District, call Tom Rood (598-975). For information about the September meeting and seminar, call Dave Devore (330-329-6457). Area residents are invited to attend the CCA of Skidaway meetings and seminars held on the second Monday of the month at St. Peter’s Church.

This article was originally published by The Landings Association on their website. Visit landings.org to read the original article. https://landings.org/news/2019/08/21/cca-september-meeting